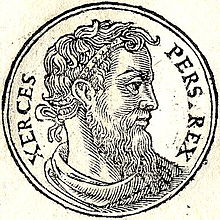 Xerxes, also historically known as Ahasuerus, was fabulous wealthy. Look no further than the Gate of all Nations and the Hall of a Hundred Columns at Persepolis, his lavish palace. He wintered at his palace at Susa. With an empire of 127 provinces extending from India to Ethiopia, his tendency to throw extravagant drinking parties, complete with guest goodie bags was unprecedented.

Crowned the king of Persia at age 36 somewhere around the end of 486BC, he calmed the volatile relationship with Egypt and Babylon. He completed many construction projects that served as obscene displays of his wealth.

But on more than one occasion, Xerxes was known to have a nasty, irrational temper. In short, he was a hot head who liked to party.

There was that time when he confiscated a sacred Babylon golden statue of Bel and melted it down, which didn’t sit well with the king. And then there was the time he invaded Greece. When all was said and done, his armies included Assyrians, Phoenicians, Babylonians, Egyptians and Jewish soldiers.

And let’s not forget the Battle of Thermopylae temper tantrum, where a small force of Greek warriors led by Spartan King, Leonidas, took a stand against the Persian forces but were ultimately massacred. You remember the movie, 300? Yes, it could be said Xerxes had quite a temper.

But for all his military prowess and wealth, the bible doesn’t dwell on these accomplishments. In the Old Testament, Xerxes is only a bit player in a larger story. He is known as the king who banished Queen Vashti in favor of a more demure woman who took the name Hadassah. We know her as Esther.

It’s through Esther that the story of God’s ability to use individuals to accomplish His goals is told. Esther…and by extension, Xerxes…is a story of hope and redemption in the face of overwhelming persecution.

9 thoughts on “X is for Xerxes”