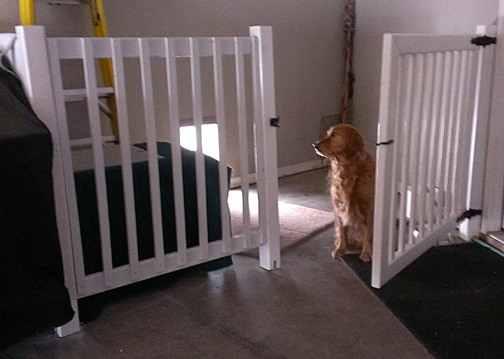 Tanner has always had an indoor/outdoor dog kennel in the garage. He inherited it when he arrived in October of 2007. But it was about half this size.

Recent events have made it necessary to expand the kennel. No, he didn’t get anyone knocked up. That would be quite impossible (sorry buddy). But he is going to have some new playmates shortly…

And I know you remember one of these two.

Well, if you haven’t guess it already….

Peanut and her family are moving back to Middle Missouri! Yep, it’s true. Peanut, her Mama and three cats are en route as we speak. Dad is following as soon as possible with the moving van and the dogs.

So here’s what’s happened. Work with me and see if you can follow this.

Army Guy has decided to leave the military and pursue a college career with his GI Bill. And we think that’s a stellar idea, given the state of the economy, and uncertainty of the future of our military commitments in various hell holes around the world. So, he applied and was accepted at an area university, and will work towards his commercial helicopter license and undergraduate degree in aviation. Awesome.

And residence will, once again, be in the lower level of our house! You may remember when Peanut and her mama came to live with us when she was 5 months old while her daddy was deployed to Afghanistan. That stay ended up being almost two years and ended with me sinking into an empty-nest funk when they moved back to Alabama.