July’s photo blogging theme at A ‘lil’ HooHaa was Patriotic. Since both the United State and our neighbor to the north, Canada, celebrated Independence Days in July, the challenge might not have been too terribly challenging for those residents. Our Independence Day had a little of everything crammed into it. We started with a day trip to have breakfast and see Bridal Cave at the Lake of the Ozarks (a trip worthy of its own post later), a lakeside lunch, a visit to the great-grands house, and ended with some “light up the sky” activities back home. Truth is, we enjoyed a long three-day weekend and Mother Nature mercifully agreed not to rain on anyone’s parade for the holiday fun.

So here’s my patriotic five:

1. Peanut’s Patriotic Pedicure
Because one simply cannot go into the holiday with naked toenails.

2. Patriotic Pals
Peanut and one of her three puppers.

3. Patriotic Peanut (with a sparkler)
Thank you Pinterest for the idea of using a Solo cup as a “hand guard”!

4. Patriotic Pops
A last minute stop for some fireworks on the way back from the cave ended up being quite a show in the driveway. 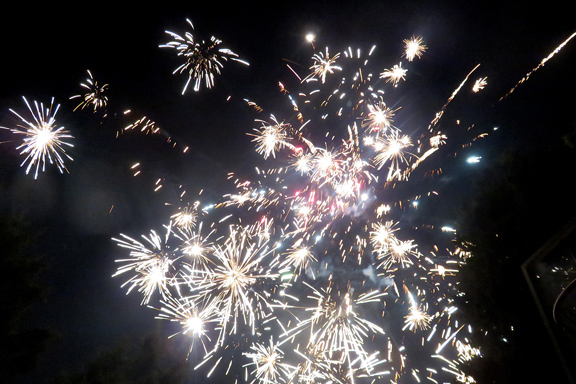 5. Patriotic Popsicle
Our littlest star-spangled firecracker in her own right.

That’s my five for the month. Don’t forget to stop by PJ’s on July 31st and enjoy the other celebrations.