It’s common knowledge we, as women, feel more inadequate after viewing “women’s magazines” that are supposed to be targeted to us. Ridiculously thin, gorgeous models and unrealistic beauty expectations can make even the most confident woman shudder with self-doubt.

But if you really want to feel inadequate, read Proverbs 31. This is Super Woman, personified. And I wonder just exactly who was the inspiration for such praise? Because she doesn’t sound like anyone I know. And certainly not me.

Before we collectively throw up our hands in despair, know this….. the Proverbs 31 woman does not literally exist.

Nope. Never has, never will. Sure, there are those who may have come close, but they are few and far between. The majority of us will never evolve into this dream woman.

It’s speculated that King Lemuel may be King Solomon, which makes the person giving advice none other than Queen Mother, Bathsheba, wife of King David. A woman who knows a thing or two about what sort of wife a king might need by his side.

It’s also speculated the Proverbs 31 woman is most likely a combination of many women. She is the personification of years of wisdom…not a literal checklist to determine a woman’s worth. Of course, we should aspire to the virtues in this passage, but reality is such that most of us will never be able to live up to all these expectations.

So stop obsessing. This is not the gold standard for women. Stop and think about the women who are considered role models in Scripture. They may surprise you.

Eve: a woman who can’t follow directions.
Sarah: a barren woman who conspires with her servant, Hagar, to give Abraham a child. Then she turns on Hagar in resentment and bitterness, and has both her and her son exiled.
Rahab: a prostitute.
Ruth: a pagen daughter-in-law and despised foreigner.
Naomi: a woman who is without husband or sons.
Esther: a woman who manipulates events to sway the odds in her favor.
Bathsheba: a woman who succumbs to adultery with King David; and after her husband is murdered, she is made queen. Years later she plots against David to make sure her son, Solomon, inherits the throne over his older brother.
Mary, mother of Jesus: an unwed, pregnant teenager.
The woman at the well: a Samaritan woman who’s had five husbands and currently living with a sixth man. She is despised in both religious and secular circles.

Not a Proverbs 31 woman (in the literal sense) in the bunch. In fact, some ‘virtues’ are seriously lacking. What is important is God used each of these women to fulfill a larger, divine plan. He used their strengths and weaknesses and equipped them to be women he wanted at that given point in time.

I read Proverbs 31:10-31 and can’t help but feel I don’t measure up. When that happens, I have to remind myself that even though I’m seriously flawed, in Christ, I’m accepted, free from condemnation and can never be separated from God.

I’m a work in progress….just like all the other women listed above. But, the one thing that ties us all together can be found at Proverbs 31:30. 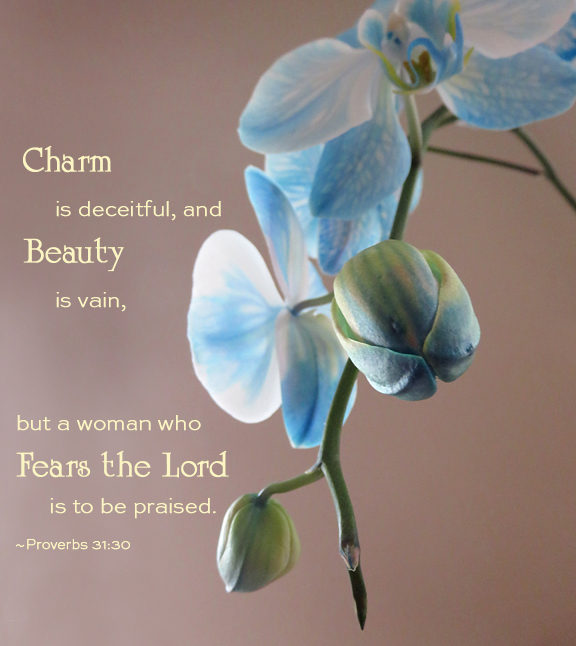 Playing along with those at Life Through the Lens

11 thoughts on “That kind of woman”