The Halloween candy is far from finished but now we’re racing towards the holidays. My October 31st was a whirlwind of activity with grandbabykin school parties and trick or treating. Why do I subject myself to all this…for the second time around? Simply because they are only little once and I want to soak up all I can before I’m too old to be able to run this pace this anymore.

And, this year was a special year. Twix was finally old enough to be Snow White. That, in and of itself, doesn’t sound especially significant until you know the back story…….

A long time ago, in a galaxy far, far away (circa 1989), there lived a four-year-old Snow White with her white, woodland bunny. These were costumes I made for my wee ones for Halloween fun. Little did I know at the time, Snow White would stand the test of time in more ways than one.

When 1991 rolled around, another four-year-old Snow White made her debut with sister princess, Rapunzel (another homemade costume). This one was expected. After all, it took me quite a while to make the Snow White costume, and I was determined to get more than one wearing out of it. I think they both wore it for a couple of Halloweens.

Fast forward to 2013. Five-year-old Peanut donned her Mama and godmother’s costume for another generation of Disney princess trick or treating. Why did I keep this costume in storage so many years? I suppose I simply couldn’t part with the memories. 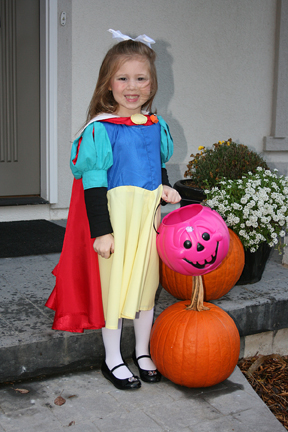 And this year, at four years old, Twix followed in this tradition. And, a whole new set of memories have been made.

And, yes, the costume will go back into storage now. The Golfer has instructed me to keep it in case she should have a future princess to carry on the tradition.

Even though I missed Thankful Thursday at Brian’s Home, I’m thankful for the opportunities to make memories through photography for my family. I hope after I’m long gone, they will also stand the test of time.