By a Carpenter mankind was made,
and only by that Carpenter
can mankind be remade.
~Desiderius Erasmus

Have you ever wondered about the juxtaposition of the Creator of the Universe’s choice of professions when he assimilated himself into humankind in the form of a carpenter?

Of all the professions available during that time, why a carpenter? Why not a basket weaver? A tent maker? A herder? A camel trainer? A fisherman?

Joseph, Jesus’ earthly father, was believed to be a carpenter. In biblical time, it was common for sons to follow in their father’s footsteps. No one really knows for sure what occupation Jesus had prior to his three-year ministry before his crucifixion and resurrection, but it’s probable he was some sort of craftsman.

Jesus would have had years of training  under Joseph in the fine art of taking raw materials and crafting them into something useful. He would have been skilled in working with broken pieces to restore them so they were functional again.

A carpenter or craftsman would have been the perfect choice. He picked up tools, used his hands and built. He had vision, he planned, he designed and used raw materials to create. Whatever he created was put to use.

Let’s now consider these skill sets when he moved into the real purpose for his presence on earth.

Brokenness
During the time Jesus lived with his creation, he worked with the broken. His focus was on the broken-hearted, broken in spirit and broken in body. His hands healed and restored. His words became the glue that held people together. The nails that were ultimately hammered into his hands and feet became ways for us to fasten our lives together with God.

Deconstructing to reconstruct
Craftsmen are no stranger to tearing apart something to repurpose it into something different. Jesus deconstructed everything from cultural moires to assumed perceptions only to reconstruct them to more useful, beautiful outcomes. Whether is was the woman at the well or befriending a much-hated tax collector, Jesus was no stranger to upsetting the proverbial apple cart with his words and actions. His time was spent with the oppressed, the cast-offs, the undesirables. His words and actions tore apart their lives and restored them to something beautiful….something useful…repurposed. 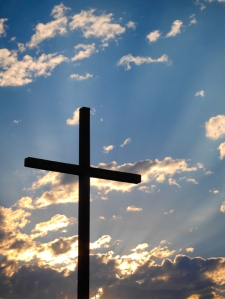 This week is Passion Week. The last week God the Son walked on this earth as a human before he was crucified. During this week, he experienced all the emotions we do: joy, anger, sadness, frustration, fear, anxiety. During his last days on this earth, Jesus felt every emotion we feel on a daily basis. He created the vastness of the universe but is also a Messiah that understands all about our messy, painful lives. He came to deconstruct and then reconstruct us into something useful and beautiful and by doing so, reconcile his creation back to God the Father.

Blog hopping with Comedy Plus for Happy Tuesday and wishing everyone a very Happy Easter!

5 thoughts on “Just a carpenter”