Last summer, while on the way back from a day trip to St. Louis, Entrepreneur and I detoured through Wentzville, Missouri, the town where my dad was born and my grandmother lived the majority of her adult life as a widow. Her name was Laura, and she was a short, stout German woman who was born in 1896. Her maternal great-grandfather, Johann Phillip, jumped the pond from Partenheim, Darmstadt-Hesse, Germany with his family about 1846. I have yet to find the immigration record, but I’m still looking. He first shows up in the 1850 census in St. Louis, Missouri.

Laura grew up in the Wentzville/New Melle area and was married to my grandfather August, June 2, 1920.  As you can see from this wedding photo, my grandfather must have been very tall since, seated, he’s almost as tall as she is when standing! After his military service in WWI and their wedding, August and Laura moved into a lovely, white, Victorian home and began their family. They were blessed with five children before my grandfather passed away at age 54 in 1949. My grandmother continued to live in the house she came to as a new bride until she could no longer live independently. She passed at the ripe old age of 92.

And that’s where we pick up this story.

With my phone’s navigation and a general location pulled from the recesses of my memory, we located my grandparent’s Victorian home. Instantly, I recognized it even though almost everything around it has changed. 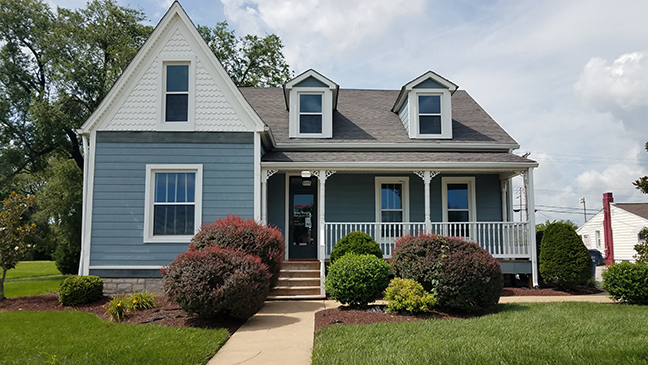 We only visited my grandmother a couple times a year, but there was no doubt this was the same house. Built across from the railroad tracks (which I vividly remember the train and its midnight whistle), it’s no longer the white house I remember. I was thrilled to see it had not been torn down, but now housed an insurance agency within its walls. Little do the new owners know how many other memories are housed within its walls.

Well kept and in apparently good condition, I approached the front porch, wondering if anyone was working on this summer Saturday. And this is where is gets a little weird. Since we didn’t visit very often, I only have bits and pieces of memories of my grandmother. My grandfather died long before I was born. But, as soon as my foot landed on the first step, the creak of the wood unleashed a flood of memories that swelled up and my eyes started to leak, which was surprising to me. Flashbacks filled my mind faster than I could process them as I reached for the door handle. It was locked but I couldn’t resist taking a peek through the window.

The layout of the rooms is exactly as remembered. Not one wall has been moved. Of course, the rooms are now filled with 21st century business accessories like desks, computers and phones.

Straight back from the front door, was the kitchen with a stove, sink, small table and chairs with a bathroom off to one side. A clock chimed every hour. A door off the kitchen opened to a staircase leading down to the very dank, cold and spooky root cellar. I went down there exactly one time. The left, front room was the guest room, where my sister and I slept on a trundle bed. Further down the front hall on the left was the dining room with a larger table and where, even though my grandmother lived alone, there always seemed to be homemade cookies in tins when we came to visit. As you enter the front door, the main living area was a room to the right with a piano and an assortment of chairs, knick knacks on tables and a couch. Through the family room was the master bedroom with a wood stove and lovely dressing table. That room looped back to the kitchen. A long, narrow staircase ran parallel to the front hall and the remaining bedrooms spanned out throughout the second floor. It was probably a very grand home in Wentzville for the 1920s and 30s.

Gone is the backyard cistern that provided water to the house. Water that was, in our citified opinion, undrinkable and we always brought a thermos of our own from home. Gone is the vegetable garden that stocked the root cellar. Gone are the out buildings that were both mysterious and off limits to children. But, the front porch is exactly the same. The front porch where I remember sitting with my cousins on the steps and hanging over the railing. The porch where I remember my grandmother waving goodbye as we pulled away towards our own home in Kansas City. I wonder if her eyes leaked during those moments.

Memories are funny things. Some stay just below the surface of consciousness and can be summoned at a moment’s notice to warm the heart. Others are buried deeper, waiting until the creak of a wood step comes to resurrect them.

Linking up with Comedy Plus for Awww Monday. Not your typical Awww Monday post, but one I hope brought a little smile to your face and, perhaps, a few memories of your own grandparents.

7 thoughts on “Strolling Down Memory Lane”