Yesterday, I posted the beginning of my June at warp speed month. It continued when we took our oldest daughter and the grand girls to Branson, Missouri. Entrepreneur spent weeks organizing this vacay as an end-of-the-school-year trip to congratulate them on doing so well academically in school through a very tough pandemic year.

Dogwood Canyon
Our first trip was to a spectacular place named Dogwood Canyon outside of Branson in Lampe, MO. I can truthfully say it’s one of the most spectacular areas I’ve ever seen. The park covers 10,000 acres of pristine Ozark landscape that straddles the border between Missouri and Arkansas, and is complete with waterfalls, trout-filled streams, caves, steep bluffs and other gorgeous sights. Here’s just a little of what we saw on a two-hour tour of this amazing nature preserve.

The historical significance of this area was highlighted on our tour. Native American burial caves and other artifacts have been found on the grounds. These caves are off-limits to visitors but artifacts from the Civil War and native Osage and ancestral Osage tribes who inhabited the area around Little Indian Creek are on display in the main building.

The main building houses a restaurant, artifact museum and gift shop. It’s fashioned after a working grindstone mill. There is also a treehouse that was build by Animal Planet’s Treehouse Builders. 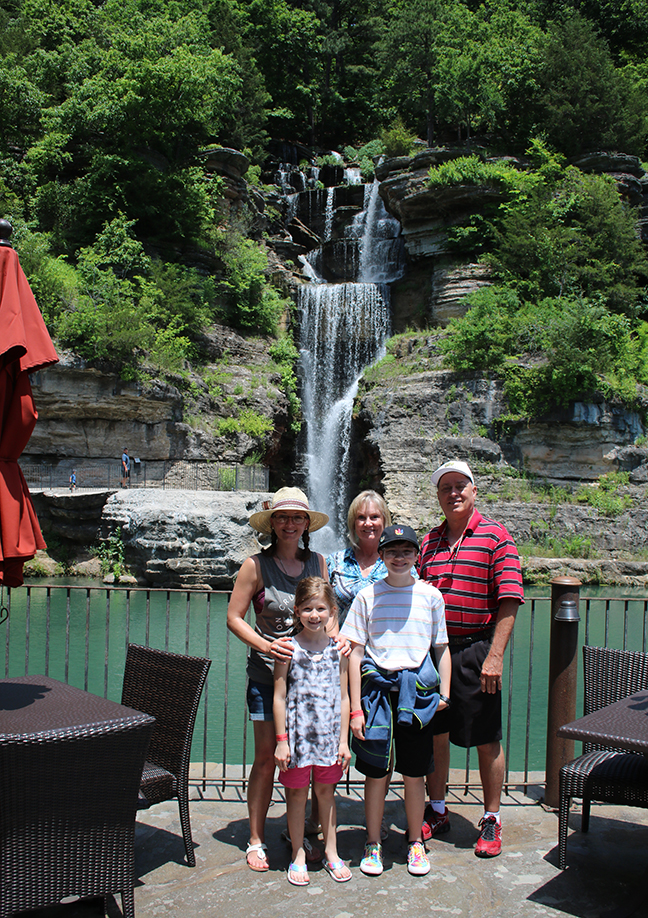 The tour took us into Arkansas where there are elk, bison, long-horn steer and other wildlife herds that are all but extinct in this part of the state. As a Johnny Morris property, we learned about conservation of wildlife and how to be good stewards of nature. 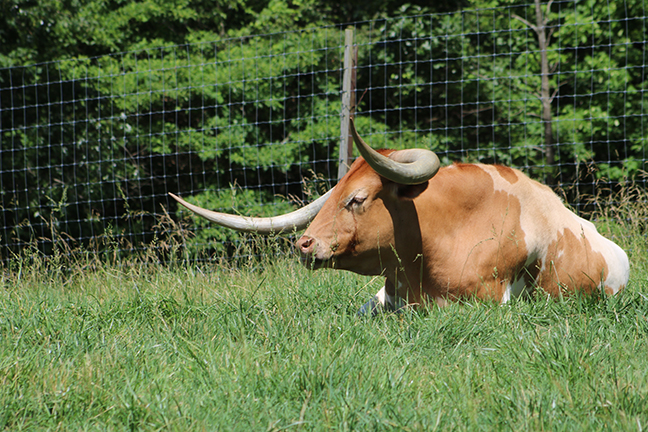 Park scientists care for and oversee the growth of the herds. Earlier this year a rare  American  White Bison was born, joining the herd of 25, and was named Takoda. The name is a Sioux word meaning “friend to everyone.” We saw Takoda on our tour, but I could not get  a good photo because it was nestled in the tall grass. Native American lore states the white bison is a sacred animal and the birth of one is a sign of peace and good fortune. I think we all could use some peace and good fortune given the state of our country and world now.

There were elk babies on our tour but it was hard to find them since the mamas hide them from predators in the deep shade. Can you find the baby? Without my zoom lens, I would not have seen this one. 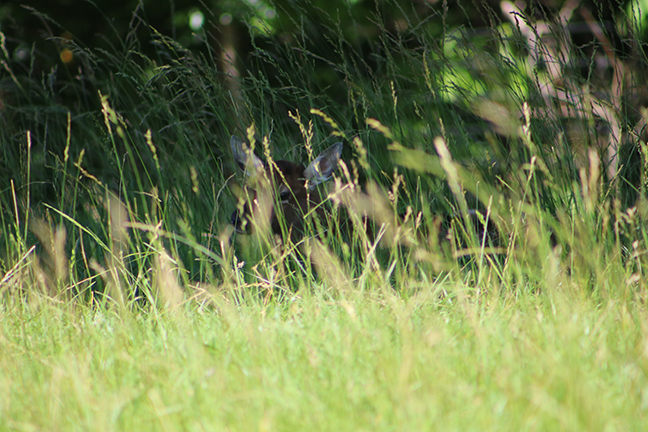 Silver Dollar City
Next on the list was Silver Dollar City, an 1880s-style themed amusement park with more than 40 rides & attractions and live shows. There’s also 100 local craftsmen demonstrating America’s heritage crafts, 18 restaurants and 60 unique shops. And it all sits on top one of Missouri’s deepest caves named Marvel Cave.

Twix is finally tall enough to ride some of the roller coasters. Mama was drafted to accompany them as Nana doesn’t do coasters anymore. 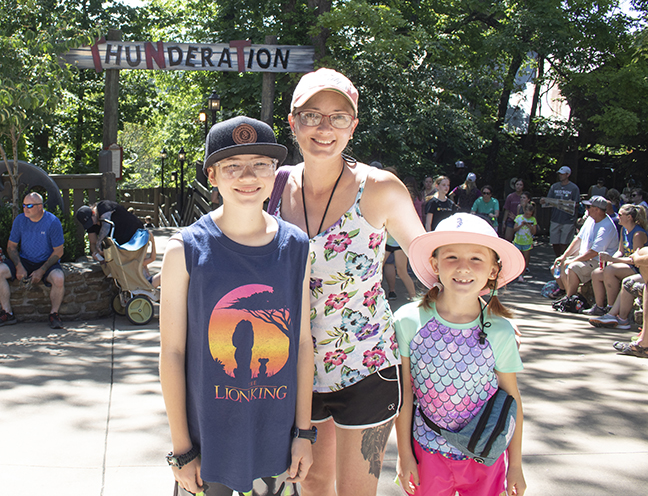 But, it was the Giant Barn Swing that did Mama in. The ride swings on a pendulum forward and backwards, gaining speed and altitude topping out at 45 mph. At the crest, the ride swings more than seven stories high, almost carrying riders upside down. After that, Peanut was on her own for the other thrill rides.

The day was the hottest on record so far this year and we closed out our visit in the air conditioning watching the Harlem Globetrotters. They are still as entertaining as I remember. 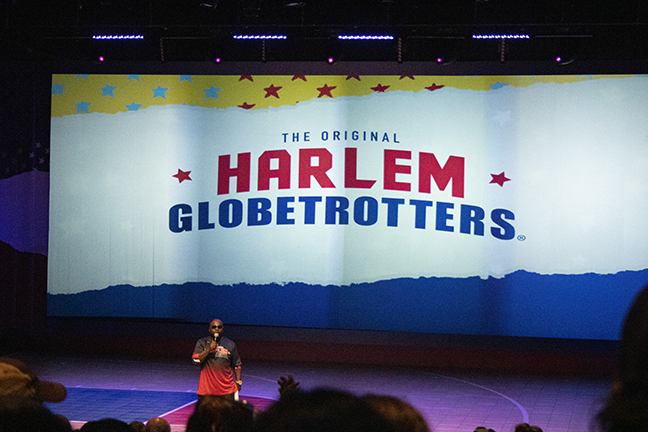 The Aquarium at the Boardwalk
One of the newest attractions in Branson is an aquarium. It falls short of the one in Springfield connected to Bass Pro Shops developed by Johnny Morris, but is still a nice aquarium with some very unique exhibits.

Overhead stingrays travel in herds throughout the tanks.

Deep sea creatures seem to glow all the time. 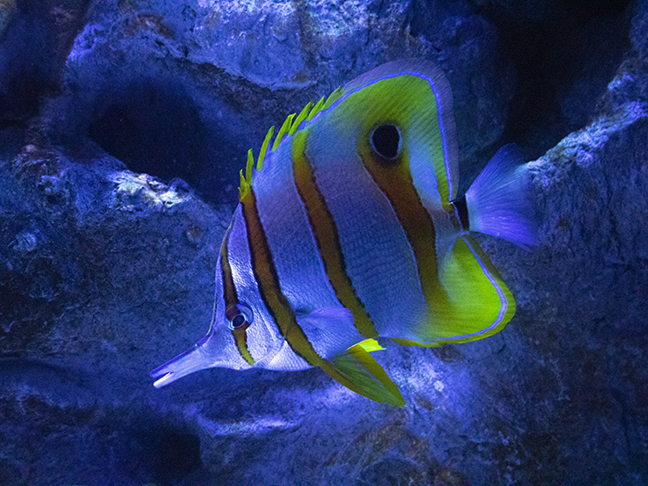 They had a mirrored, infinity room of jellyfish tanks. It gave quite the mystical feel seeing all the glowing, floating jellyfish in the vertical tanks. This was my favorite exhibit.

Glowing coral. We who live topside really have no idea of the beauty and mystery of our underwater world. We finished the tour with a touch pool where you could touch sandpiper rays, starfish and anemones.

Wonder Works
The end of our stay included taking the grandies a three-story, interactive, science-focused “amusement park.” Education and entertainment with more than 100 exhibits took a good three hours to see/do everything. First up was the astronaut training gyroscope where Peanut couldn’t wait to experience zero gravity…or more zero gravity since she rode every roller coaster at Silver Dollar City. She rode this twice. 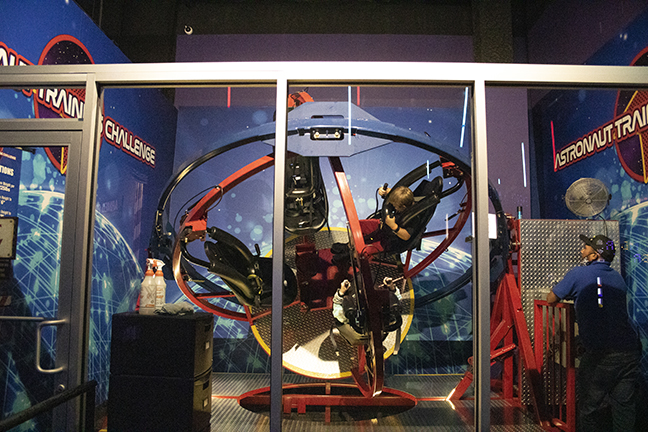 Twix passed on the gyroscope but had a great time in the bubble lab. Scenes from The Abyss movie kept coming to mind. 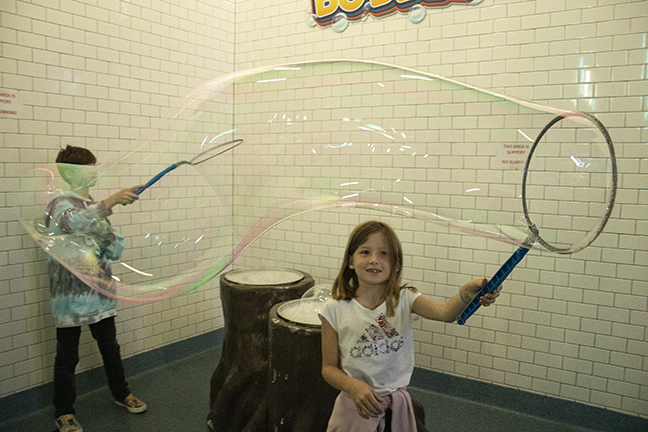 We experienced 74mph hurricane-force wind, sand that changed color with elevation, an opportunity to see how long we could keep our hand in the same temperature of the water that sank the Titanic. There was much more to do and see that was too numerous to mention. At the end, both of them clipped into harnesses and scaled two climbing walls. Easy-peasy for these two little monkeys. It was a hard pass for Nana. 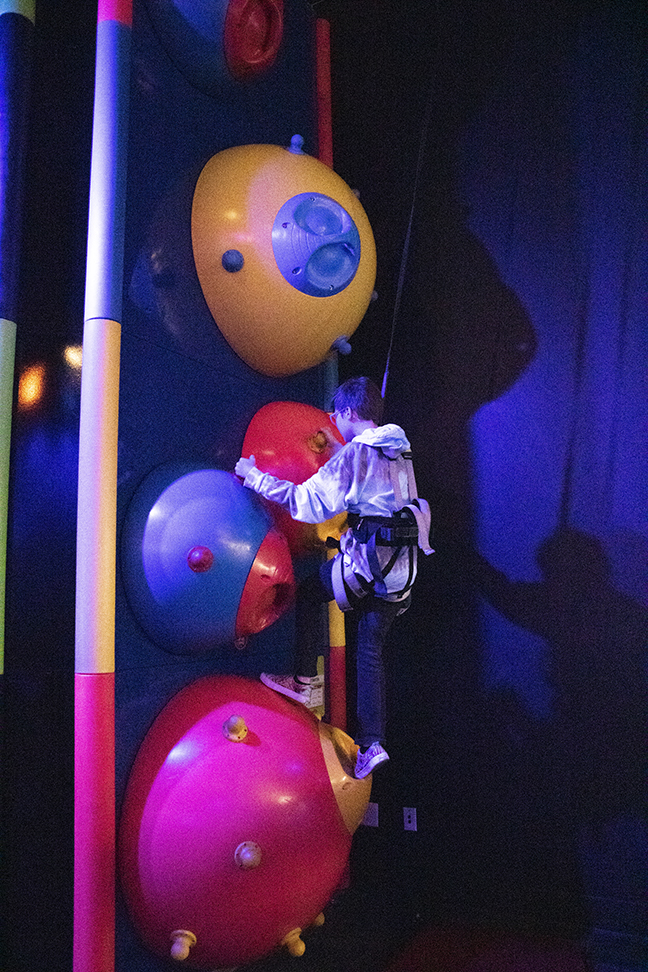 Now you know why I said the first half of June went by at warp speed. The grandies are gone now for five more weeks and I think it might take me that long to recover.