Each species is a masterpiece, a creation assembled with extreme care and genius.
~E. O. Wilson

Last Sunday was a day like no other. I was picking tomatoes in the garden before I left for Peanut’s birthday party when I looked down and saw a hummingbird on the ground. Hummingbirds in my yard are a common sight, but not on the ground. He was fluttering and could not get up in the air. Since our veggie garden is in the sun all afternoon, I  gently picked him up and placed him in the shade of a different garden.

By now I’m late so I leave him, hoping for the best and promising to check on him when I get home. While at the party, I’m researching places to take him. I land on a wild bird rehabilitation center….but it’s in St. Louis. An hour and a half away. And it’s Sunday. I call and speak to someone who recommends putting him in a small box and start feeding him sugar water. If I want to be really, super nice, I can go get dehydrated bloodworms to mix in for protein.

When I return from the party, he is still there, noticeably weaker. No progress getting up into the air. I simply can not, will not leave him there to die. And, yes, I drove across town to a pet supply shop to get freeze dried bloodworms.

I located a syringe and the feeding began. Crushed up freeze dried bloodworms and sugar water. Yummy. 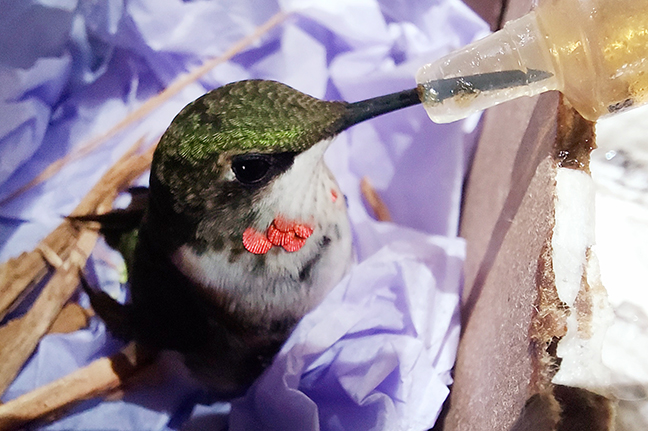 I watch hummingbirds in my yard. I take photos of them in-flight. I write about them but have never seen one up this close. They are magnificently beautiful creatures.

A hummingbird expert called from the rehab center and told me what I needed to do. She knows a college student coming to Columbia on Monday night who would be willing to pick him up and take him back to her on Thursday.

So, keeping him alive is the challenge. I keep in touch via text with both ladies. The next job is to redecorate his apartment box so he has some room to move around.

The issue is that he is not feeding himself. He is more than happy to feed out of the syringe so that’s what we do….every 30 minutes….because that’s how often they need to eat during the day. Mercifully, they do sleep at night.

And I am suppose to teach on Monday. Entrepreneur is sure I’m crazy by now because I take him to class with me. This is outside his realm of understanding. My students love him.

During this experience, I am able to closely look at this amazing creature and marvel at everything from the color of his iridescent feathers to the detail of his beak and tongue. Though small, he is truly a magnificent creation.

He’s a juvenile, male, ruby throat hummingbird. Upon closer inspection, it looks like he’s been through some altercation with another bird or animal. He may have some head trauma since he won’t self feed.

His name is Romeo. Because he successfully stole my heart.

He does perch and tries to fly. He’s very vocal about being in the box—or not wanting to be in the box. We are bonding….or at least I am. But he still won’t self-feed.

We return from school and a very nice college student arrives about 9pm for the hand off. I may have had some tears after he left. And for a brief second, I thought perhaps I could keep him and rehab him on my own. But, that thought was quickly replaced with the realization I was no where equipped to handle this task and there were others much more experienced in wild birds…not that THAT would take much.

So, Monday evening I say goodbye to Romeo and updates are promised to me. He was much happier in the larger, clear case. The bloodworms were sent with him because, evidently, I spoiled him from eating the hummingbird food that was sent for him!

Regardless of what happens to him how, I’m forever changed after holding him in my hand, looking into his eyes and having him perch on my finger. As I said, the odds are stacked against him but he has the best chance at living when he gets to the wild bird rehab center. Nature, left to its own devices, can be very cruel. We were created to care for and watch out for the earth and all its inhabitants.

The Lord God took the man and placed him in the orchard in Eden to serve it and to guard and care for it. ~Genesis 2:15

The handwriting of God is all over creation. And no where is it more evident than when we come face-to-face with nature and realize just how amazing and precious all forms of life are.

Linking up late with Brian’s Home and Thankful Thursday. I’m forever thankful for this experience. I hope for the best, but realize he may not survive if they can’t get him to feed on his own.

But for 36 hours, God allowed me to care for him…forever changing me.