On September 15th, I wrote a post about my maternal grandmother and how I respected her efforts in raising a family during the Great Depression. On the other side of Missouri, there was another woman who was doing the same thing. She is my paternal grandmother and lived outside of St. Louis in the Wentzville area. A few years ago I found her house and wrote about it HERE.

Another woman of great fortitude, my Grandma Laura was born in 1896 of very sound German Lutheran stock. Her maternal great-grandfather, Johann Phillip, jumped the pond from Partenheim, Darmstadt-Hesse, Germany with his family about 1846. He first shows up in the 1850 census in St. Louis, Missouri.

Grandma Laura grew up in the Wentzville/New Melle area outside of St. Louis. Her highest level of education was 7th grade. She married my Grandpa August, June 2, 1920.  As you can see from this wedding photo, my grandfather must have been very tall since, seated, he’s almost as tall as she is when standing! After his military service in WWI and their wedding, August and Laura moved into a lovely, white, Victorian home. Like my maternal Grandma Maidia, they were blessed with five children before my grandfather passed away in 1949 at 54 years old of diabetes and kidney failure. They were only married for 29 years.

Unlike Grandma Maidia, all Grandma Laura’s children were born before the Great Depression hit. But that was probably little comfort since she still had to come up with ways to feed and clothe them during this time of struggle. My grandpa was a rural mail carrier and, like Grandma Maidia, Grandma Laura didn’t work outside the home. I’m not sure how much a rural mail carrier made in the 1930s and 40s but based on the outfits in these pictures, it appears my dad’s family was more affluent than my mom’s family when they were growing up. 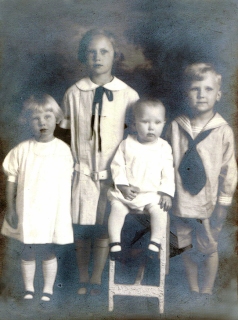 Even though Grandma Laura lived in a more urban environment during the Great Depression, I’m sure life was not easy. In 1933, the St. Louis area was experiencing higher unemployment than the national average at 30%. Like most women during the time, she lived through two world wars along with surviving the depression years.

Grandma Laura continued to live in the same house she came to as a new bride in 1920 until she could no longer live independently. She outlived her husband by 43 years and never remarried. She was a strong-willed, independent widow and passed at the impressive age of 96 in 1992.

I remember she would play Christmas carols in German on her record player (now, we call them turn tables) during the holidays. And whenever we came to visit, cookies would magically appear in the cookie tins in the dining room. I remember her garden in the backyard and the many mysterious sheds that lined her property. The “root cellar” was the scariest place I’d ever seen. I was told by my parents she was extremely upset when The Lutheran church in town switched services from German to English. Yes, a good German Lutheran she was to the core.

On paper, she doesn’t look like a woman with remarkable credentials with only a seventh grade education. She never learned how to drive a car but she did live in a town where she could walk to many of the places she needed to go. Still, she raised a family of five responsible and competent children who all grew up to be successful in their own right.

And that is a testament to her legacy.