Summer is all but over unless there’s an “Indian Summer” hiding in September. And what a summer it’s been.

Entrepreneur is adjusting to his *new normal* with the chemo pills he takes every day. The Bell’s Palsy is getting better…slowly. We added a fur baby to our family in May….Cabo the Goldendoodle, who is 5 months old this month. The grandbabykins are back from seeing their dad in Alabama and school started a couple of weeks ago. We’re still taking care of Twix during the days, while attempting to do something that resembles work in our home office.

But all that pales when looking at what’s going on in our country. Today’s musings will be accompanied by a few uplifting captures from my summer garden and seasonal quotes I like. Hopefully, they will bring a smile to your face…in the face of all the ugliness of the news. 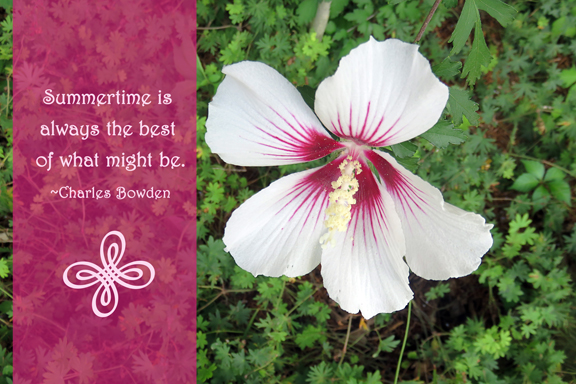 Hurricane Harvey hit Houston, TX last weekend and the devastation continues with water rescues and destruction of property. I was really hoping there wouldn’t be any looting, but the depths in which some people will descend never really surprises me anymore. In spite of those that steal and loot, there have been hundreds of stories about everyday heroes who are rescuing people with their own boats and taking them to safety. Humanitarians are trying to find and take care of abandoned pets. Below is a video of a line of cars towing boats en route to Houston to offer their help. This. Is. Awesome. These are the stories that renew my faith in humankind.

Which leads me to the Florida professor who tweeted Harvey was karma for the predominantly Republican  people in Texas. Really?! With that type of mentality, I suppose one could make a case that people living in the predominantly Democrat states in the Northeast deserved to be hit by Superstorm Sandy. Ludicrous. I was happy to read this professor was relieved of his position. Yes, he does have the right to voice his opinion (see the first amendment), but it should not shield him from the consequences of this really stupid remark.

I also believe those people who comment about presidential assassinations should be held accountable as well. Missouri congresswoman Chappelle-Nadal, who advocated President Trump’s assassination, should be relieved of her responsibilities as someone who was elected to uphold the laws of our country…which do not include assassinations. Last I read, the Lieutenant Governor has called for a special session of the Senate to expel her from the legislature.

This lace cap hydrangea grows every summer in the garden. It was blooming when we planted it years ago, but never bloomed again…until this summer. If anyone has a clue as to why, I’d love to know. I think this quote personifies the human will to survive in the face of natural disasters and other life challenges. We never know what we’re capable of until our faith, tenacity and resolve are put to the test.

Next on my @#$% list is ANTIFA. This group needs to be categorized as terrorists, plain and simple.

1. the use of violence and threats to intimidate or coerce, especially for political purposes.
2. the state of fear and submission produced by terrorism.

Everything I’ve seen and read about these people fits the definition of terrorist; especially in light of their assault on the peace rally in Berkley a few days ago. While reasonable people recoil at the messages of the neo-Nazi and white supremacist groups, we need to be equally disgusted with the rhetoric and methods of these masked…..I don’t even know what to call them. While human beings, they react violently without any semblance of humanity towards anyone who disagrees with their views.

The only thing I can say about what’s happening in Charlottesville and other cities who have commemorated soldiers and historical figures who are on the wrong side of culture’s opinions now is that is makes me both sad and angry. I’m sad because I can understand how statues of Confederate and slave-owning historical figures can bring about bad feelings. On the other hand, this is part of our nation’s history. Whatever message is being perverted by the presence of a piece of stone will not be erased with its disappearance. Will we go so far as to rename every street, county, city, currency, school and building named after someone we disagree with in order to erase any and all reminders of our past that some find offensive? My personal opinion is if a statue has the power to destroy your psyche, perhaps you need to spend some time self reflecting on what’s really behind your rage, and how it could be channeled towards something more constructive and educational. On the other hand, if I were a Jew living in Germany, I probably wouldn’t like seeing a statue of Hitler on my way to work. Recently, I ran across an article about a brilliant response by a town in Germany where they pranked a neo-Nazi group who marched in their town every year to commemorate Hitler’s deputy, Rudolf Hess. Brilliant, and a much better response than the assault and destruction methods that seem to be the norm now for anything deemed “offensive.” When you stop and think about it, every ethnic and cultural group has something in which they can take offense. If every one of those offenses was appeased, where would it end? And, who gets to decide which offenses are legitimate and which are not? It’s a Pandora’s Box.

So, those are my musings on this summer day. Agree or disagree, I would hope we would be able to engage in dialogue as intelligent adults and either find common ground, or just agree to disagree.

Linking up with others over at Peabea’s Pictorial Tuesday.…on Wednesday.